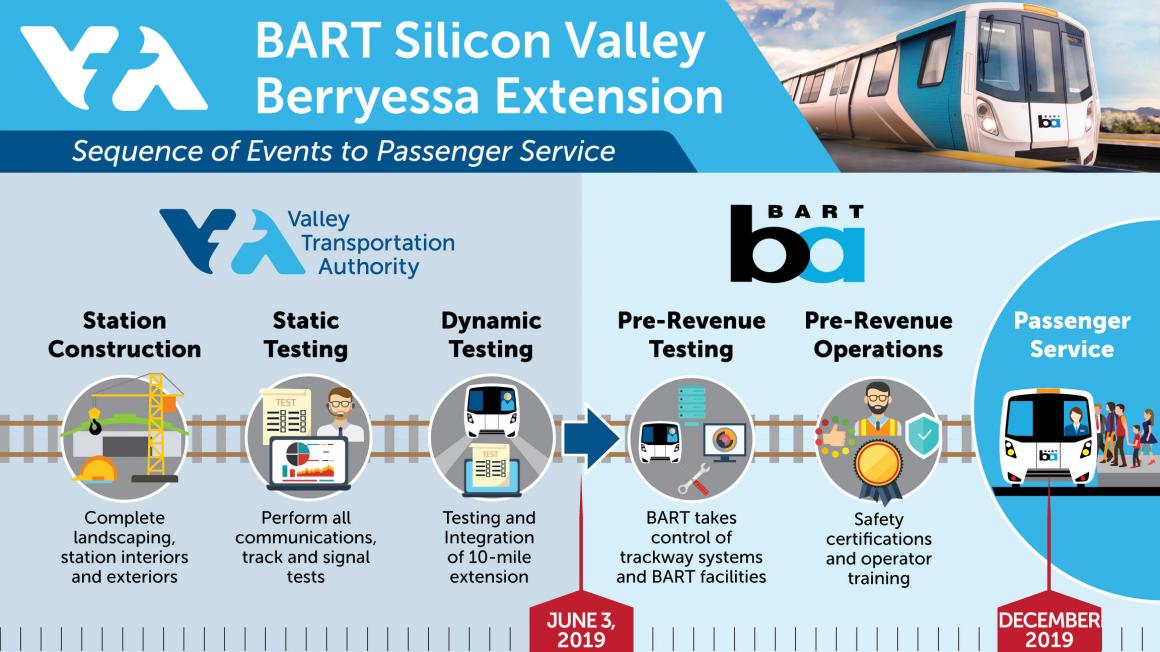 BART now has exclusive access to begin the final phase of testing and pre-revenue operations in preparation for passenger service at both the Milpitas & Berryessa Transit Centers planned to begin before the end of 2019.

While VTA designed, funded and built the systems and facilities, BART will operate the service, maintain the systems and two new BART stations located within VTA’s two new transit centers in Milpitas and North San Jose.

For nearly two decades, VTA has been working with BART to plan, design and construct the system and stations and deliver the regional service to Santa Clara County.

“With construction and VTA’s testing of the major systems completed, VTA has passed the baton so BART can bring this project over the finish line,” said VTA’s General Manager and CEO Nuria Fernandez.

BART Takes Over Now to Finish the Job

To enable passenger service to begin December 2019, BART will:

The Benefits to You

In addition to the mobility and economic benefits the project has already delivered, once open, visitors will be able to access both Transit Centers by VTA bus, bike, taxi/rideshare, car, employer shuttles, car, scooter, wheelchair, VTA light rail (in Milpitas), and on foot. You'll be able to securely park your car or bike.

Taking BART from the Milpitas Station will get you to San Francisco in about 60 minutes. Add an extra 5 minutes to that trip if you start from the Berryessa/North San Jose Station. That’s a very attractive option compared to getting stuck on the highway in rush hour traffic and then having to find and pay for parking once you arrive!

The BART Board of Directors is expected to vote June 13 on the proposed fares and the service plan among the Warm Springs, Milpitas and Berryessa Stations.

As we get closer to opening, we want to continue to stay in touch with you about our progress, so sign up via our new system to receive updates and information via email on the BART Silicon Valley project.