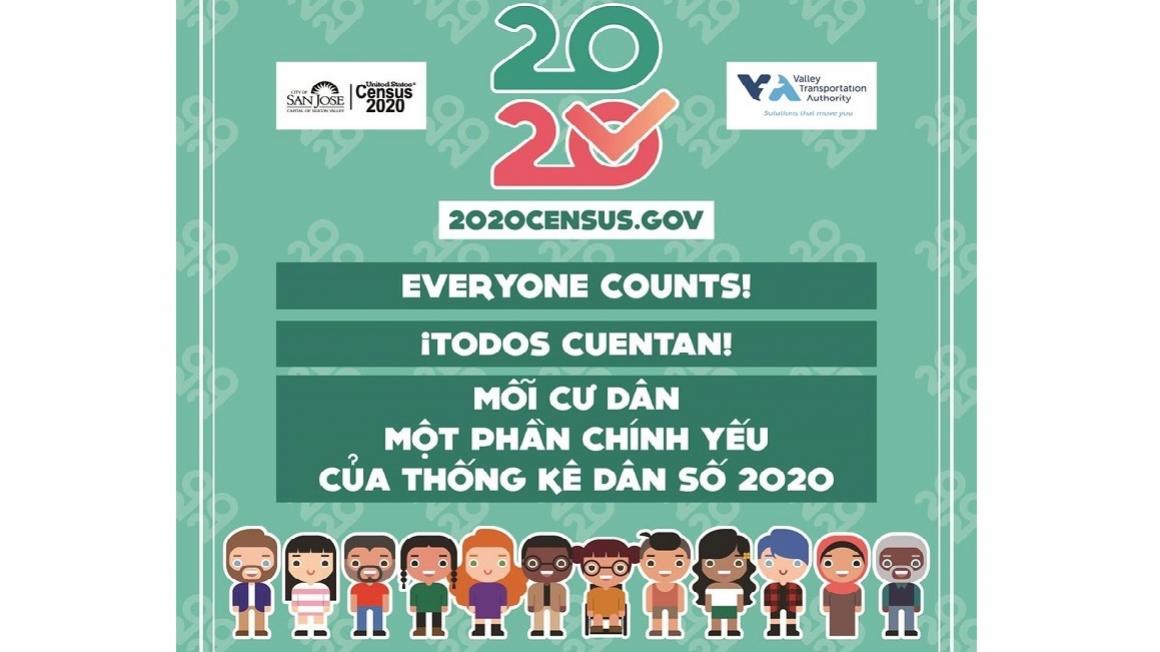 The City of San José Office of Cultural Affairs and the Santa Clara Valley Transportation Authority (VTA) are thrilled to announce the winner of the 2020 Census Poster Contest. Tran Minh Tien Le, an Evergreen Valley Community College student, was selected for his winning design, which will be displayed prominently on VTA buses, trains, and stations.

The theme of the promotional campaign is “Everyone Counts,” emphasizing inclusivity and that everyone who resides in Santa Clara County—regardless of citizenship status, home ownership, age, racial or ethnic origin, gender, sexual orientation, religious affiliation, or disability—deserves to be counted!

College students, who are historically under-counted populations in the census, were the specific target of the poster contest. Students attending Santa Clara County colleges were invited to submit original poster designs to promote participation in the 2020 Census. In addition, the contest also provided professional development training to local college students.

A panel of arts professionals and representatives from VTA and the City’s census efforts felt Le’s design with playful cartoon figures captured the spirit best and was unanimously selected as the winning entry.

Guidelines for the 2020 Poster Design Contest were sent to art instructors at nonprofit and public Santa Clara County colleges and universities in August 2019. Submissions were received from students at seven different schools into November.

Honorable Mentions include designs by Fiona Morris of Santa Clara University and the collaborative team of Andy Ngo and Richard Dinh of San Jose State University.

The posters will be installed on VTA buses and trains in late February. An awards ceremony will be held in March in advance of 2020 Census mailer.

Every 10 years, the U.S. Census Bureau sets out to count every person living in the United States — regardless of age, citizenship status, and gender. Getting the 2020 Census right is important for all our communities — particularly those most likely to be undercounted. Census data impact us every day.  Businesses such as banks and financial institutions, utility companies, health care companies, retailers, and manufacturers rely on accurate census data to track consumer behavior and make strategic and operational decisions. Census data determines political representation and federal funding for critical programs that support education, housing, transportation, social and emergency disaster relief services.  The census survey is short and on average takes about 10 minutes to complete it. Starting in March 2020, people will be able complete the census over the internet, by telephone, by mail (paper survey) or via in-person visits from Census workers. Information collected is confidential and protected by federal laws and can only be used to produce statistics. For more information about the 2020 Census, visit www.2020census.gov

You can support the census in your neighborhood by becoming a volunteer "Census Station Ambassador." You will explain to community center visitors how to use the census computer/tablet and raise awareness about the purpose and importance of the 2020 Census. Qualifications to be an ambassador include the following: