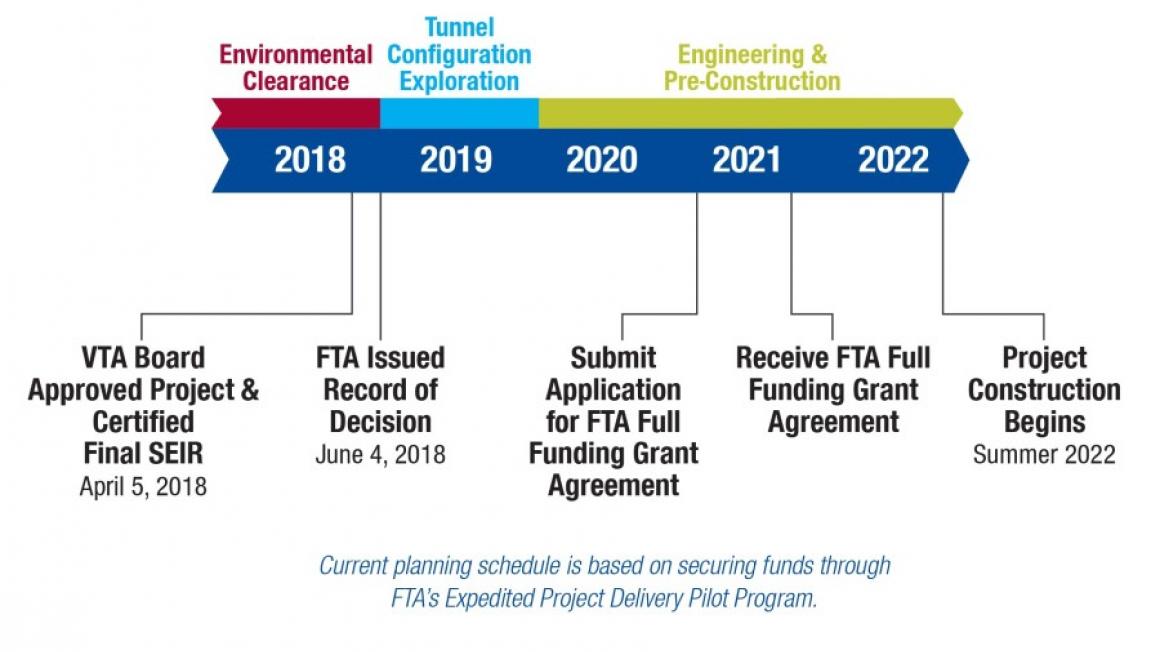 The long-held vision of bringing BART service into Silicon Valley will become reality very soon when service on the 10-mile Berryessa Extension begins in just a few short months. The final stages of testing are underway with operator training, simulated service and safety certifications the last major efforts required before passengers can connect to the regional rail system in Milpitas and San Jose. For decades to come the completed project will provide a public transit commute alternative for the highly congested I-880 and I-680 corridors. Besides significantly enhancing mobility, the Berryessa Extension is transforming land uses near its stations. Even before shovels hit the ground, the project spurred new higher density transit-oriented development and created thousands of jobs.

The second phase of the BART Silicon Valley program will greatly expand the mobility and economic benefits generated by the first phase to Berryessa. The 6-mile, 4-station project includes stops in east and downtown San Jose, the Diridon intermodal transit hub, and Santa Clara. While the Berryessa Extension alignment was designed to operate in an already established freight rail corridor, the BART Silicon Valley Phase 2 Extension will operate in a tunnel underneath Santa Clara Street, a major roadway lined with retail shops, restaurants and businesses. While BART service to and through the area will have huge long-term benefits, it is paramount to avoid short-term construction impacts that could disrupt business activity and inconvenience neighborhood residents.

BART’s conventional twin bore tunnel design would require top down construction and extensive utility relocations in order to build stations, resulting in major roadway closures. VTA therefore looked at alternatives that would minimize disruption to the heart of San Jose.  After over a year of extensive study, VTA determined that a single-bore tunnel with off-roadway station construction, similar to that of typical development projects, could both maintain existing business operations and mobility in the corridor along with supporting San Jose’s growth and densification goals, the latter to take form as transit-oriented communities (TOCs) surrounding the new BART stations. In spring of 2018, BART agreed to the single-bore tunnel, and in June 2018 VTA received required federal environmental clearance to proceed with the Phase 2 Extension.

For the past year, VTA and BART have been working toward a mutually acceptable single-bore tunnel design. Various track and passenger platform configurations within the tunnel were evaluated, along with different overall station configurations. Design alternatives were compared regarding safety, maintenance and operations, ventilation requirements, power and train control systems, and, most importantly, passenger access and convenience. In April 2019, VTA and BART agreed to a side by side track configuration with 24-foot center platforms in an approximate 51-foot interior diameter tunnel. VTA’s General Engineering Consultant (GEC) will now further develop the concept and bring the project’s design to a preliminary engineering level by Fall of 2020 to be timed with an application for a grant through the Federal Transit Administration Expedited Project Delivery Pilot Funding Program.

While the larger tunnel takes more time to bore, results in more earth removal (muck) and costs more than a smaller tunnel, the extra interior space can potentially accommodate systems and facilities such as traction power sub stations and ventilation plants that would otherwise be required outside the tunnel occupying space at street level. Placing these facilities inside the tunnel reduces the need to acquire certain real estate thus reducing property acquisition costs. In the near-term the GEC is refining the project scope, schedule and overall project cost.  VTA plans to present the updated information in early Fall.

At the same time, VTA is working on several efforts to maximize the economic, development and quality of life benefits that this mega infrastructure project will bring to Santa Clara County. Through the Transit Oriented Communities (TOC) Strategy Study, VTA is working with the cities of San Jose and Santa Clara to develop and implement planning policies and best practices that support the vision for thriving, culturally rich, non-car-dependent neighborhoods in station areas. TOCs will both increase transit ridership and improve access to jobs and housing, especially for those who are transit dependent or from low- to moderate-income households. VTA has also engaged an architectural design and engineering firm who will develop the framework for modern and sustainable community enhancing stations and station areas.

It’s been 30 years since the vision emerged to ring the San Francisco Bay with reliable, efficient, public transportation. Passenger service on the new BART Silicon Valley system will change the dynamics of this ever-growing region.