This spring, VTA conducted a month-long survey seeking input from commuters along the Highway 87 corridor as part of the State Route 87 Corridor Study. Conducted in partnership with the City of San Jose, the study aimed to identify technology-based improvements and innovative solutions along SR 87 that will maximize use of existing infrastructure and focus on less capital-intense operational applications to improve congestion and lead to lower levels of solo driving.

Participant Information:
Approximately 1,600 commuters took part in the survey, which asked participants about the time of day they travel, their frequent destinations, and whether or not they would support certain potential improvements. 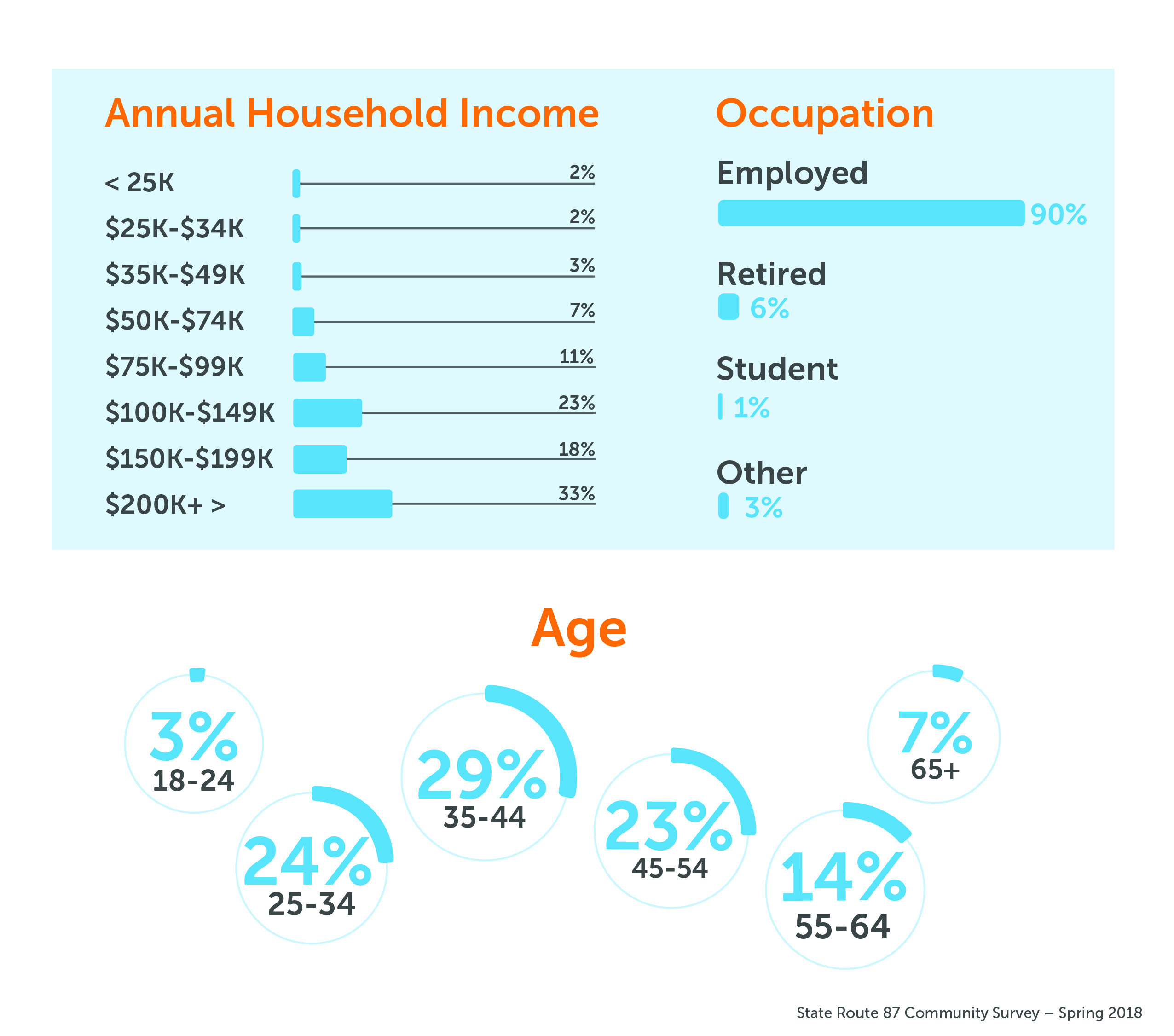 Origins and Destinations:
The survey included origin destination questions to glean more information about where participants live, work, and/or study. Responses highlighted the greater residential density at the southern end of SR 87. As seen in the figure below, where home locations are listed on the left and work locations are listed on the right, many Highway 87 commuters begin their commute from homes in the Blossom Hill, Willow Glen, Communications Hill, and Almaden neighborhoods and commute north to the Golden Triangle, Central Expressway, or downtown. The “Golden Triangle” includes parts of north San Jose, Santa Clara, and Sunnyvale enclosed in a triangular shape by the SR 237, US 101, and I-880 freeways. 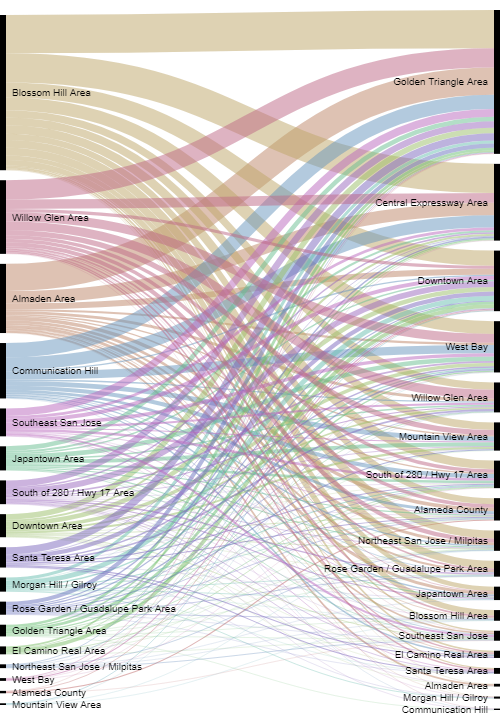 Commuting Methods:
Three quarters of survey respondents typically travel to work by driving alone. Transit usage along the corridor is low compared to ridership in the rest of Santa Clara County. Faster travel times (35%) was selected as the most motivating reason to begin using transit. 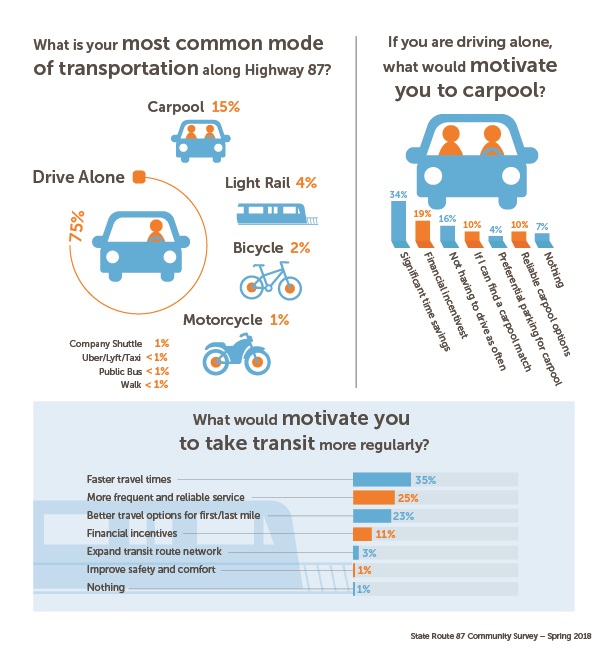 Bicycle Commuting
Only 2% of survey takers use a bicycle as their primary mode of transportation, despite the Guadalupe River Trail running parallel to much of Highway 87. 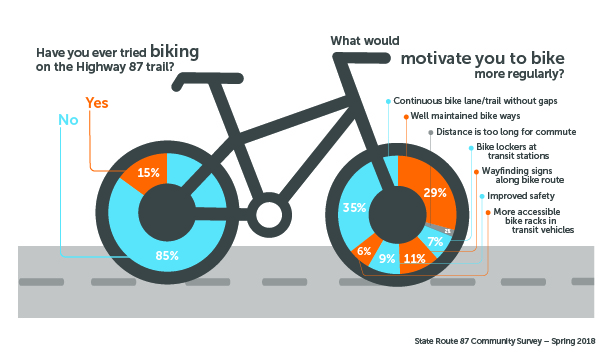 Support for Potential Projects:
Survey participants were presented with a series of potential improvement projects and asked whether or not they would support each initiative. There was general support for most potential projects. The greatest amount of support was given to improving the lighting on bike trails and at public transit stops.

The SR 87 corridor study includes an investigation of the challenges and opportunities in making available use of the existing freeway shoulder part-time for traffic. The majority of survey respondents supported part-time shoulder use for buses and other high-occupancy vehicles. Opening the shoulder for part-time use by all vehicles and converting the carpool lanes to express lanes were the only potential projects to receive more opposition than support. 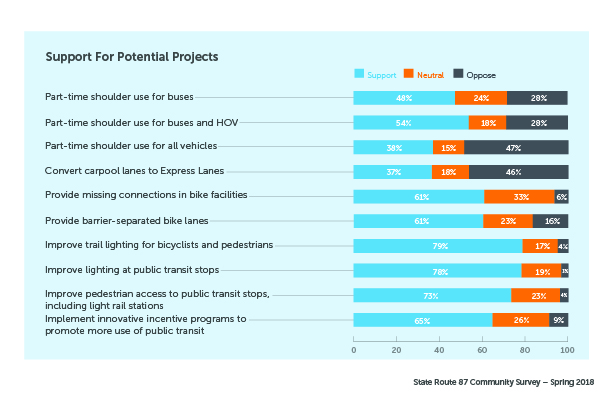 Additional Feedback:
Survey participants were also given an opportunity to share their own ideas and suggestions for improving congestion on Highway 87. Ideas included improvements to the SR 87/US 101 and SR 87/I-280 interchanges, greater carpool lane enforcement, better real-time mapping for buses and trains, and greater industry support of telecommuting.

Next Steps:
Survey information, together with other traffic and data analysis, will be used to create an SR 87 Corridor Study report and be presented to the VTA Board of Directors later this year. That report will contain key findings, project alternatives and next steps.

VTA thanks all the survey participants for providing valuable input about their Highway 87 experiences. To stay up-to-date on the Highway 87 corridor study, subscribe for email updates.