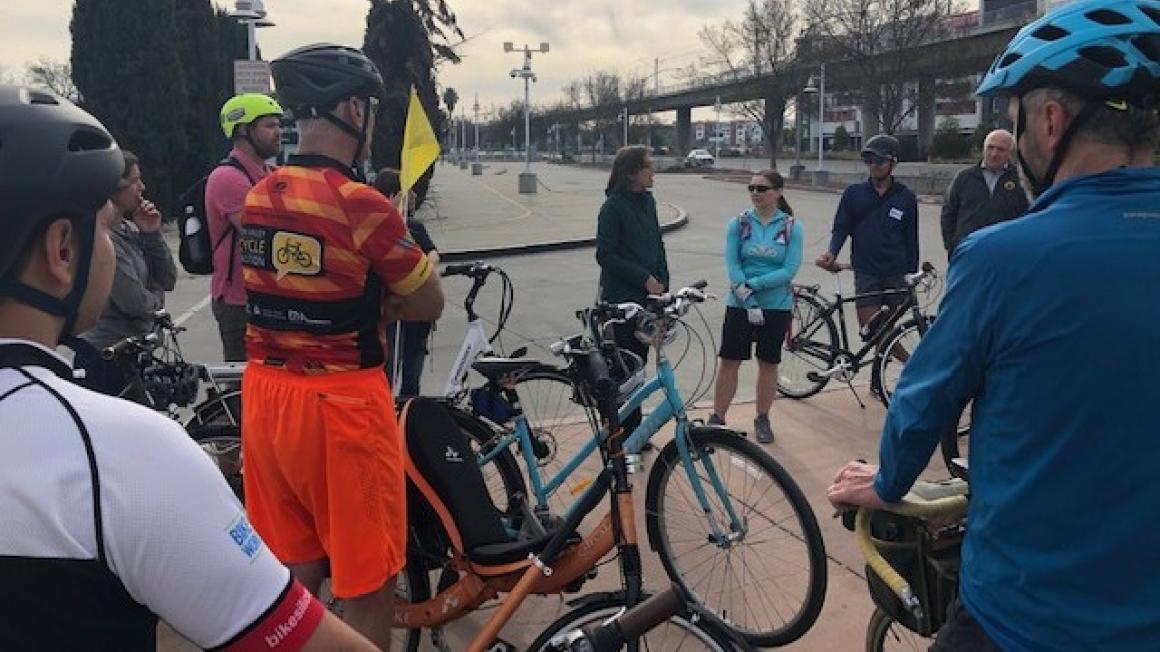 What better way to bond over bicycle infrastructure needs than to go on a bike ride together?

The Silicon Valley Bicycle Coalition (SVBC) led an infrastructure bike ride along the Tasman Corridor on Friday, February 28, to help build working relationships and share information among the many groups interested in improving the corridor for bicyclists. Attendees included Engineering and Planning staff from the cities of Milpitas, San Jose, Santa Clara, and Sunnyvale, staff from the County Department of Public Health, VTA, community advocates, and a few private sector colleagues.

The ride was a fun way to visit the corridor on two wheels to observe its potential, and look for areas that need improvement, a task the VTA is leading with the Tasman Corridor Complete Streets Study.

Tasman Drive, an important transit corridor which VTA light rail serves, is poised to become even more useful for transit, walking, and biking with planned projects. Those include the opening later this year of the Milpitas BART station, and numerous transformative office and mixed use developments in various stages of planning.

Starting near the newly built Milpitas BART station, Tasman Drive extends from Great Mall Parkway and heads west through North San Jose, Santa Clara and Sunnyvale. Right now, this multi-city corridor has a fairly disjointed mix of bike lanes and sidewalks, with several sections lacking either or both. Variety abounds in this 7-mile stretch where participants of the infrastructure ride observed new modern high-density housing or office towers that abut the sidewalk and their accompanying parking garages. There are also low-density housing units, mobile home parks, sprawling office parks set back behind ample blacktop parking, and a host of other infrastructure in various states of disrepair or construction. The hope is that these locations can someday be stitched together by VTA light rail and a seamless network of protected bicycle pathways and sidewalks.

At the start of the tour, more than 20 participants took off toward the Coyote Creek Trail near Tasman Drive and Cisco Way. The trip included various stops along the way to provide riders with updates on various development and infrastructure projects planned for the area, including the Related Santa Clara project that will include millions of square feet of retail, business, housing and entertainment space.  There were also briefings on improvements to the regional train station at Tasman and Lafayette Street for the ACE and Capitol Corridor lines. The group observed three more trail connections at the Guadalupe River, San Tomas Aquino, and Calabasas Creeks. Trails along Coyote and Calabasas creeks at Tasman are unpaved, but Santa Clara and San Jose are making efforts to upgrade and complete them.

In Sunnyvale, the ride circumvented the section of Tasman Drive that currently has no bicycle lanes. The detour followed Patrick Henry Drive to Old Mountain View-Alviso Road ending at Fair Oaks and Tasman, near the far west point of the corridor.

The group took light rail back to the Milpitas BART station/VTA transit center, where they learned about the new features that integrate the transit modes at the station and highlight the importance the station will serve for our county in the future.

Later this year VTA will complete construction of the Montague Pedestrian Overcrossing which will connect passengers from the BART station to Piper Drive and the Great Mall area.