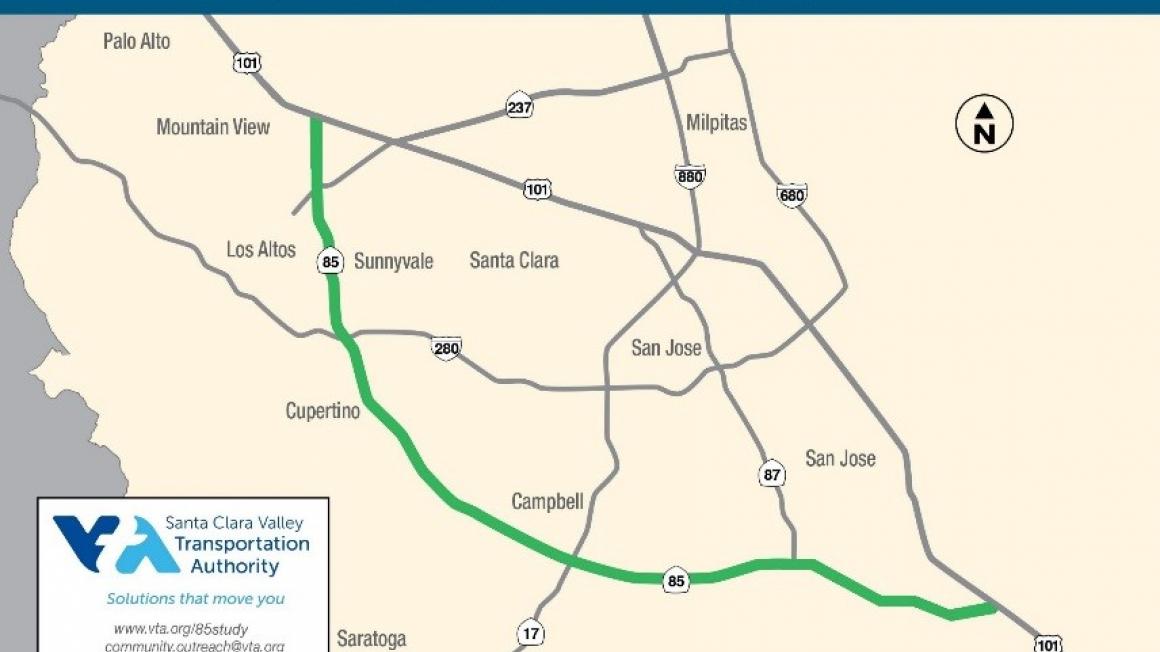 Earlier this month, the State Route 85 Policy Advisory Board (PAB), which is advising VTA’s Transit Guideway Study, asked VTA to study the feasibility of building a transit lane along this corridor between US 101 in Mountain View and SR 87.

A transit route would serve a handful of stations along the SR 85 corridor and would extend beyond the corridor to connect with employment and residential areas. Initially, transit service is likely to operate in the peak direction during commute hours on weekdays when traffic congestion can make transit time-competitive with driving. The PAB is optimistic that service levels could be expanded to allow all-day, bi-directional service in the future if funding permits.

The PAB also requested that VTA evaluate two other alternatives:

The express lane alternative represents a project that VTA is currently considering for SR 85, but has paused pending the completion of the Transit Guideway Study. These alternatives will serve as a baseline to compare to the transit lane idea.

The Policy Advisory Board also eliminated light rail as a considered travel mode for the transit lane, citing the following among other reasons:

VTA staff will now conduct an alternatives analysis to evaluate the feasibility and potential impacts of each alternative, estimate the cost to build the project and operate transit service and develop ridership projections.

That analysis is anticipated to wrap up before the end of 2019 and will be followed by a second round of public engagement.

After public engagement, the SR 85 PAB will make a recommendation to VTA’s Board of Directors about an investment strategy in the corridor.  The full VTA Board will ultimately decide what will happen to the SR 85 corridor.

While this marks a step forward in the Transit Guideway Study, a transit project on SR 85 still has many more hurdles to clear to become a reality. VTA’s Board of Directors must choose to pursue a transit project instead of an express lane project on SR 85 and subsequently commit 2016 Measure B funding toward pursuing a transit lane project. A transit lane project would also need to clear planning, engineering, environmental review, acquire full funding for construction and should secure a stable long-term source of transit operating funding.

2016 Measure B will be the primary source of funds for this project, but those revenues will be collected over 30 years and will also fund the BART extension to Downtown San Jose and Santa Clara, transit operations and improvements to Caltrain, highways, expressways, local streets and bicycle and pedestrian infrastructure.  VTA’s Board of Directors will need to decide how a SR 85 transit project stacks up against other transportation priorities.

It is important to note that transit infrastructure alone does not achieve ridership. Rather, ridership is achieved by the transit service operated in the corridor. The extent to which VTA can operate transit service in the SR 85 corridor in the future is presently unclear.

Recent direction from VTA’s Board of Directors to increase ridership and improve cost-efficiency led to significant reductions in peak-period directional routes, which bear a cost per boarding much higher than VTA’s other routes.

The SR 85 travel market is peaked and directional.