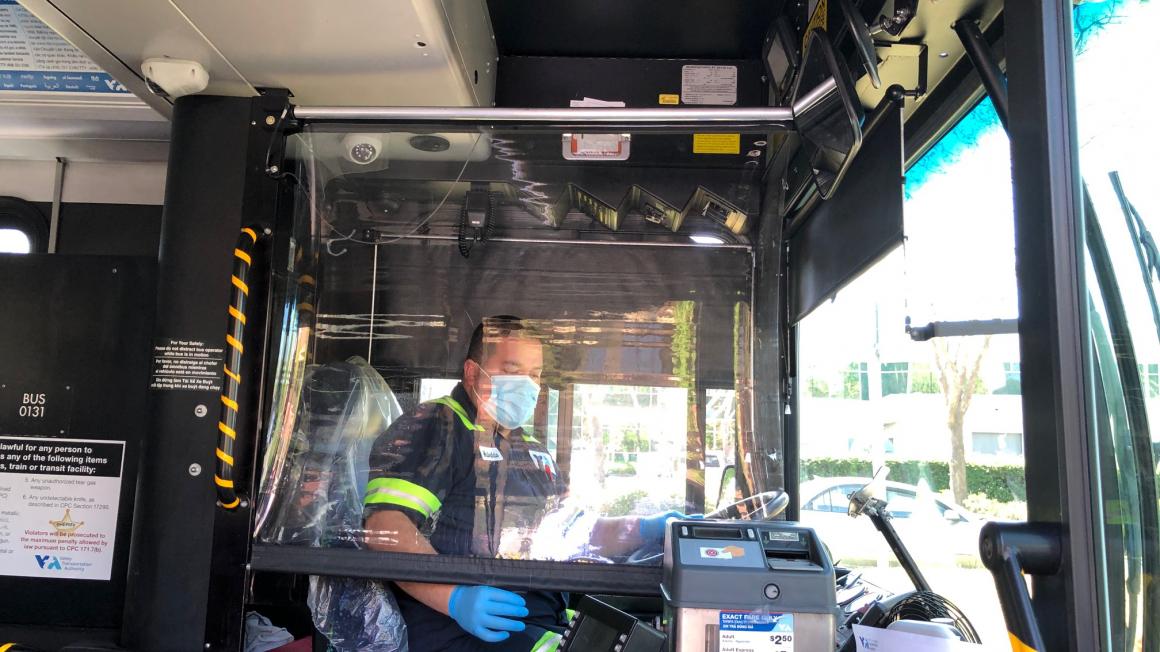 VTA employees at the maintenance yards are used to finding creative fixes to problems with vehicles and getting them back on the road in short order. But when it comes to protecting operators, the bar of their creativity was raised to a whole new level.

During this pandemic, the protection of passengers and operators has been a primary focus at VTA, with much discussion centered around additional ideas to protect operators further, including the idea of a plastic barrier. But after contacting manufacturers of off-the-shelf barriers, found those were certainly more costly, and would take more time.

That prompted an idea among staff in the Overhaul and Repair Division: What if the old pull-down sunshades from decommissioned buses could be replaced with a plastic lining? The “boneyard,” the last stop for old VTA buses before they are put up for auction or scrap, had an ample supply of these old shades and the crew went to work.

“When a project needs to be taken care of that’s a little out of the norm, we’re used to brainstorming and solving problems,” said Tony Leyva, Transit Maintenance Supervisor. “Our guys figure things out! We were doing a conference call and this topic came up but we realized we needed it now,” said Leyva.

After initially working on a barrier similar to a shower curtain, issues with the operators’ field of view was problematic. Not to be deterred, Kevin Morte, Jesus Jaras and Hubaldo Rodriguez from the Paint and Body Shop, and Preston Lingenfelter from the Upholstery Shop took one of the sunshades from a decommissioned bus and went to work. Within a matter of minutes, they had a workable solution.

Leyva estimates about a third of VTA’s fleet of 470 buses could be outfitted with the supply of old shades and is also confident it’s better than the off-the-shelf options. With two workers, Leyva says it takes about an hour or two per coach, allowing for multiple coaches to be completed each day, meaning the portion of the fleet targeted for this install could be done in a month or two.

Other barrier options are being pursued for the remainder of the fleet. VTA’s internal cost for the in-house pull-down barriers, including labor, is estimated at $600 per unit. During the time VTA has been working with vendors to come up with samples still in the works for other buses, VTA crews fabricated prototypes, tweaked the design to fit, came up with a production plan and started the install process to get operators on the road better protected.