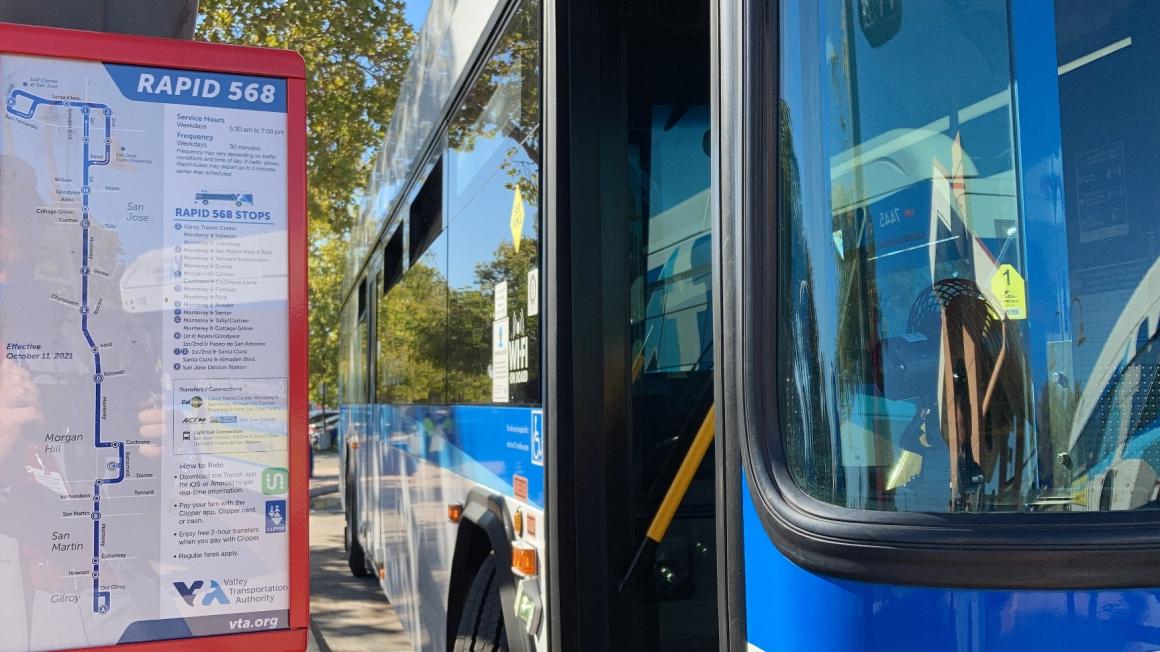 Expanding transit service to those less connected is the objective of a new transit route VTA introduced in Gilroy Thursday.  The Rapid 568 will offer frequent, fast, and reliable service from Gilroy to Downtown San Jose, with travel times up to 30 % faster than the previous options.

This new route replaces the now discontinued 168 Express, which only operated four northbound morning trips, and four southbound evening trips. That schedule limited many VTA customers to taking local Route 68, which has a nearly two-hour end-to-end travel time as it makes stops about every ¼ mile. The Rapid 568 make 19 stops in both directions, while Route 68 makes 95.

With a more direct route and fewer stops, the 568 cuts that travel time down, offering service every half hour from 5:30 am to 7 pm weekdays.  The fare is half of what the 168 Express cost, with a standard fare of $2.50.

“The idea for this route came from our passengers, and from South County residents, who told us that it just took too long to take the 68 bus all the way to San Jose,” said VTA General Manager/CEO Carolyn Gonot.  “The South County city council members, our board members, listened to their constituents and coordinated several meetings with our staff to develop the Rapid 568 idea.”

In addition to lower fares and faster travel time, VTA has also expanded access to the new route, which serves some additional stops at major intersections along Monterey Highway that were not previously served by the 168 Express.

“This (new route) reaffirms the City of Gilroy’s commitment to work together better with VTA and how VTA coordinates with Caltrain and with High-Speed Rail to get to transit options that actually motivate commuters to leave their cars at home or parked right here and not parked on 101,” said Mayor Marie Blankley, who is also a VTA Board member, speaking at the event to introduce the new line at the Gilroy Transit Center.

Echoing the need to further improve to South County’s transportation system, Morgan Hill Mayor and VTA Board member Rich Constantine said, “It is my desire to make sure that we continue this work so that we can increase public transit, not only for South County, but for the entire region.”

For San Jose State students like Adam Hall, the new Rapid route provides a more affordable and flexible commute alternative than either the previous 168 Express or Caltrain, both of which operate only morning/evening peak commute service at a higher cost. “It fits the college lifestyle where you might not have to commute until the afternoon,” said Adam. “Having an express bus that’s really focused on getting people to 9 to 5 office jobs was not meeting their needs, and this does.” Students can use their VTA Smart Passes to ride all VTA service free.

The new Rapid 568 is one part of VTA’s two-phase strategy to improve South County transit service. First, we are establishing a very strong core service along the main corridor through South County to San Jose, with the 68 and 568.

Then, to better connect to this strong core and provide point-to-point transportation throughout the community, we are dedicating 2016 Measure B funds to explore new innovative transit service models.

For areas where a big VTA bus running on a fixed route and fixed schedule just isn’t the best solution, Morgan Hill will launch one of the county’s first pilot services next year, which is an on-demand point-to-point service using small vehicles.