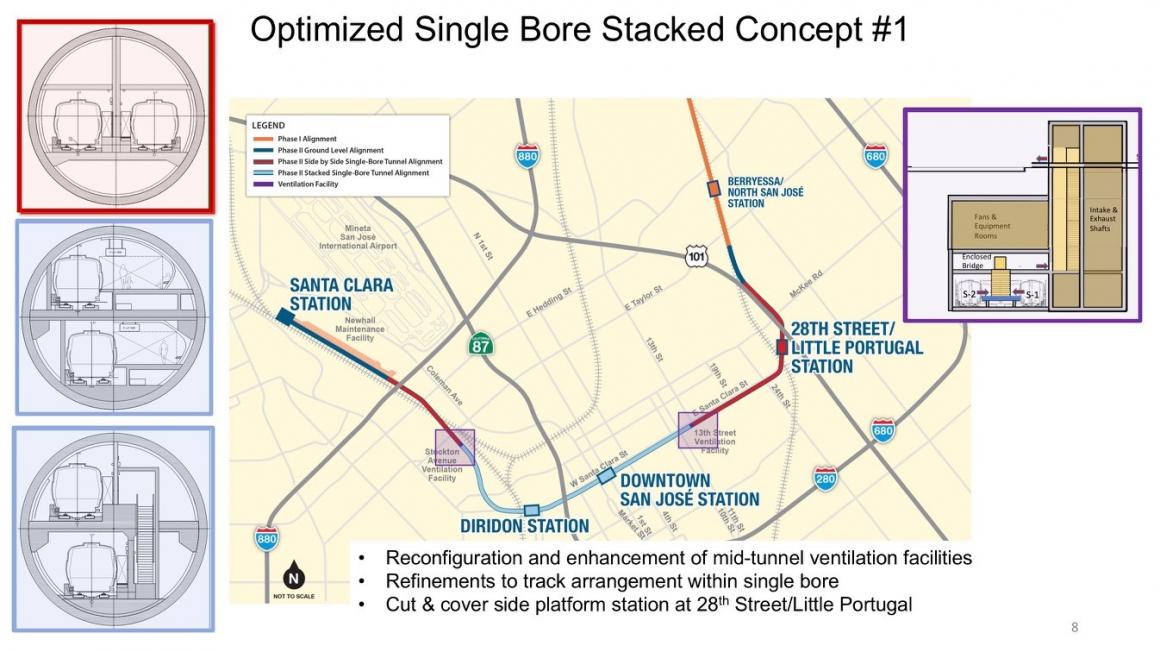 Over many months, VTA and BART have been sharply focused on overcoming hurdles that have tried to derail the long-time goal of bringing critical transportation solutions to Santa Clara County. At a special VTA Board of Director’s meeting today, the public received an update on the second, 6-mile phase into downtown San Jose and Santa Clara that radiated progress and partnerships.

VTA’s BART Silicon Valley Phase II Project has reached a critical decision point. Since last summer, VTA began advancing the conceptual design of a larger single-bore tunnel with side-by-side tracks within the tunnel. Earlier this year, engineering on the larger diameter tunnel reached a 10% design level indicating higher projected risks and costs beyond the funding available. VTA also held an industry forum to share project information with prime and subcontractors and tunneling experts. Following this forum, we received feedback from tunneling contractors that due to the higher risks associated with the larger tunnel, they may be less inclined to bid on the project, thus reducing competition and increasing prospective bids. Higher projected costs and associated risks required us to take a step back and review the options for moving forward with delivering on our long-standing promise to build a 16-mile extension of the regional BART system.

An evaluation was done of the larger bore along with both tunnel configurations that were analyzed in the environmental document, twin-bore and single bore (with stacked platforms at stations). These three configurations were evaluated based on available funding constraints, Federal Transit Administration (FTA) funding process, environmental clearance, construction impacts, contracting risks, innovation opportunities and consistency with BART system. The twin-bore configuration remains to be a less favorable option due to its construction impacts, specifically in the downtown San Jose core. The larger single bore has shown to be cost-prohibitive with higher projected risk and, as such, will not be further pursued at this time.

While BART expressed earlier operational concerns with the environmentally cleared single bore stacked platform configuration, there is an opportunity to address these concerns through some design enhancements. A solution with this configuration may be achieved as a sensible option for VTA and Santa Clara County residents and taxpayers. And as explained throughout this effort, it remains essential for VTA to work with BART to identify an acceptable configuration because BART will ultimately operate the system.

This month, in the spirit of continued collaboration, VTA staff began exploring ways to enhance and optimize the single bore stacked configuration to address BART concerns related to emergency egress, challenges with train operations and proposed ventilation designs that differ compared to the rest of the BART underground system.

In response to BART’s concerns, enhancements to the single bore project have been developed by utilizing the 13th Street and Stockton Avenue mid-tunnel ventilation facility sites to optimize both ventilation and emergency evacuation, and provide operational flexibility. These changes include reconfiguration and enhancement of these sites and refinements to the track arrangement within the single-bore tunnel. Two methods of delivering these optimizations are being considered: one with a single bore for the entire length of the alignment, and the other through the use of twin-bore tunnels for a portion of the alignment from the Berryessa tail tracks to the 13th Street mid tunnel ventilation facility.

VTA now plans to perform engineering analysis on both these concepts, incorporating operational input from BART, while evaluating cost and schedule. Once this is complete, a recommendation on an option to further advance for Federal funding will be shared with the Board of Directors.

Before Phase Two, there is Phase One! What’s the status?

The first 10 miles known as VTA’s BART Silicon Valley Berryessa Extension Project (Phase I Project) has transitioned from a VTA construction project to pre-passenger testing and operations being conducted by BART. Passenger service is planned to begin in a couple of months. This milestone was achieved through essential collaboration between VTA and BART guided by a Comprehensive Agreement executed in 2001 that defines the roles and responsibilities of each organization – VTA funds, designs with BART input, builds and owns the infrastructure and BART is the service operator.