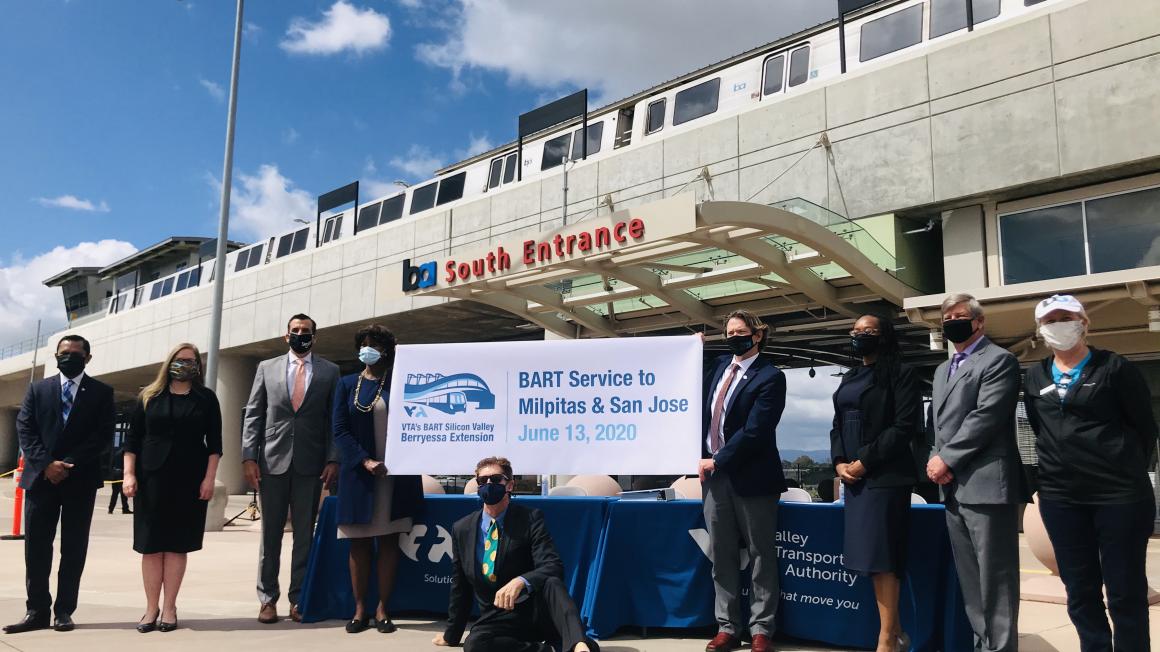 Both General Managers signed the Project Safety and Security Certificate, the last project milestone before the system can begin serving passengers. They were joined at a signing ceremony by Santa Clara County Board of Supervisors President and VTA Board Chair Cindy Chavez, BART Board President Lateefah Simon, San Jose Mayor Sam Liccardo and Silicon Valley Leadership Group CEO Carl Guardino, among others.The certificate signed today documents that safety analyses and tests are completed, verified and accepted that no safety hazards or vulnerabilities are known to exist that would prevent the Berryessa Extension from being utilized for passenger service.

On May 22, 2020, Powers will sign a Notice of Intent to Operate and present it along with the Safety and Security Certificate and documentation to the California Public Utilities Commission (CPUC), the regulatory agency for utilities in California. The CPUC has 14 days to approve the verification of safety and issue a letter paving the way for initiating passenger service on the 10-mile extension. BART and VTA have been working closely with the CPUC to ensure a successful review period and receive certification to operate.

Training of BART operators, engineers and other personnel to support the new extension of the system has been underway for several weeks. BART will deploy a new service schedule serving the two new stations prior to opening.

The first train on June 13, 2020 serving the two new stations headed north will be a Richmond bound train and will depart the Berryessa/North San Jose station at 7:56AM and will arrive at the Milpitas station just 3 minutes later at 7:59AM.

“Expanding travel options in one of the Bay Area’s most congested corridors is key to an economic revival,” said Powers. “Connecting Silicon Valley to the rest of the Bay Area will not only beef up our public transportation network but create new opportunities for much-needed housing near transit.”

“Efforts to bring BART service to Santa Clara County have been decades in the making,” said Senator Jim Beall, who was not present for the event but offered his congratulations on the major milestone. Beall secured billions of New Starts funding as a Metropolitan Transportation Commissioner and through several legislative bills he authored as the Chairman of the Transportation and Housing Committee.

“The resulting mobility, environmental, and quality of life benefits of this 10-mile extension, and the next 6-mile phase underway, will serve us well into the next century.”

A pillar in the community who is known for his tenacious support could not have been happier to have been a part of today’s announcement. “We may be celebrating today; but what we are also celebrating are the two decades that made today possible,” said Silicon Valley Leadership Group (SVLG) CEO and California Transportation Commissioner Carl Guardino.

SVLG’s leadership and engagement resulted in three successful countywide transportation funding campaigns (2000, 2008 and 2016) and a nine-county funding campaign in 2018; not to mention serving as the private sector champion for $900 million in federal funds in 2012 and two rounds of state funds totaling an additional $1.3 billion (2011 and 2018.

"Without each of those significant building blocks, we would have never had the funding to build Phase I of the BART extension."

History in the Making

VTA broke ground on the $2.3 billion, 10-mile, two-station extension in April 2012. Two soon-to-be active BART Stations are the newest addition to VTA’s Transit Centers in Milpitas and San Jose which opened on December 28, 2019 along with the newly redesigned bus and light rail network to maximize connections to the regions rapid rail system.

BART opened for service in 1972 and with the opening of these two new stations will have 50 stations, 131 miles of track and will now serve five Bay Area Counties (Alameda, Contra Costa, San Francisco, San Mateo, and Santa Clara). BART’s average weekday ridership pre-COVID-19 was 408,000 trips. Ridership projections at the two new BART stations, prior to the pandemic, were 23,000 daily boarding on opening day.

Today’s joint announcement highlights the partnership responsible for delivering this long-awaited transit solution. VTA, the mobility manager for Santa Clara County and builder of the 10-mile extension, will own the extension including the two new transit centers. BART will operate the service and maintain the system.