The Diridon Station will be between Montgomery and Cahill Streets, on the south side of Santa Clara Street.

Ticketing, fare gates, and bicycle facilities will be at street-level while the station’s concourse and stacked platforms will be underground. On the east and west ends of the platform, emergency egress and ventilation facilities will be constructed. Pedestrian connections will be provided to the current Diridon Caltrain Station and VTA’s Diridon Light Rail Station as well as the future Diridon Intermodal Station. The station area will be integrated with surrounding mixed-use development, including Google’s Downtown West, creating a well thought-out transit-oriented community. 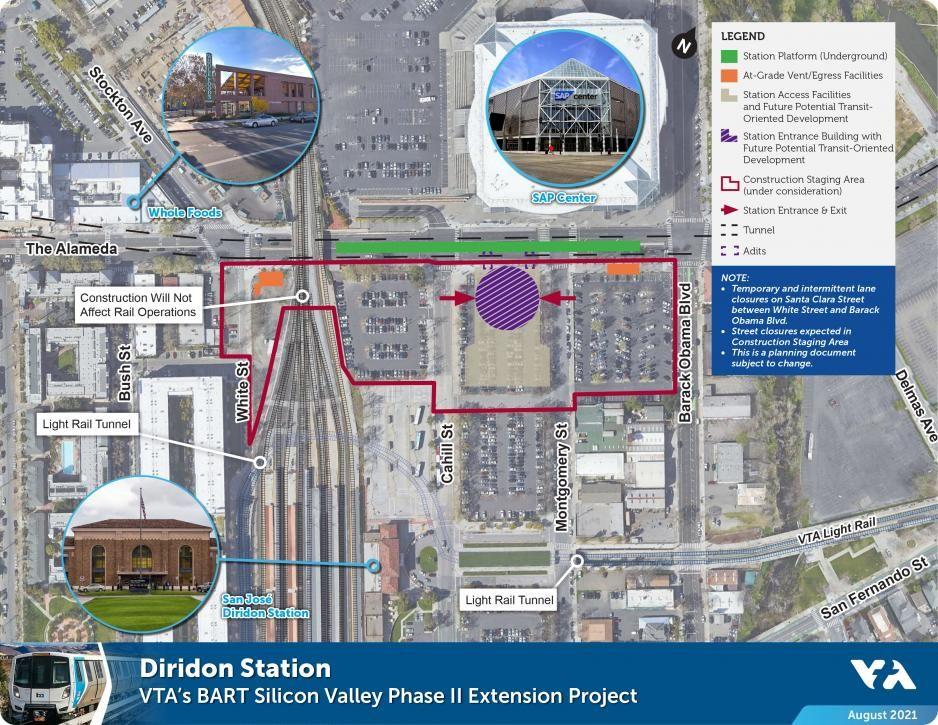 In addition to future BART service, the station serves passengers with a wide array of transit options, including Caltrain, ACE, Capital Corridor, Amtrak, bus, and light rail. With future electrified Caltrain and High Speed Rail service planned, Diridon Station is being considered the “Grand Central Station of the West”.

The Diridon Station’s lower platform will be 90’ deep, and the upper level will be 71' deep. For comparison, there are many stations across the county with deeper platforms, including in Washington DC; New York City, New York; Atlanta, Georgia; Union City, New Jersey; Dallas, Texas; Portland, Oregon; Seattle, Washington and closer to home in San Francisco and Los Angeles.

The Diridon Station area is poised to be the next dense residential and employment center of central San José and is home to both the San José Sharks and other entertainment offerings at the SAP Center.  To the west of the station, The Alameda’s tree-lined sidewalks welcome pedestrians to shops and restaurants.

A separate planning effort is underway, in partnership with the City of San José, Caltrain, California High Speed Rail and VTA to ensure that Diridon Station is designed to handle the volume of traffic that is anticipated in the coming decades.  For more information on the Diridon Station Integrated Concept Plan effort, please visit diridonsj.org.

Video is for illustrative purposes only to provide into layout of core station components. Not all information in this video is current and is subject to change.