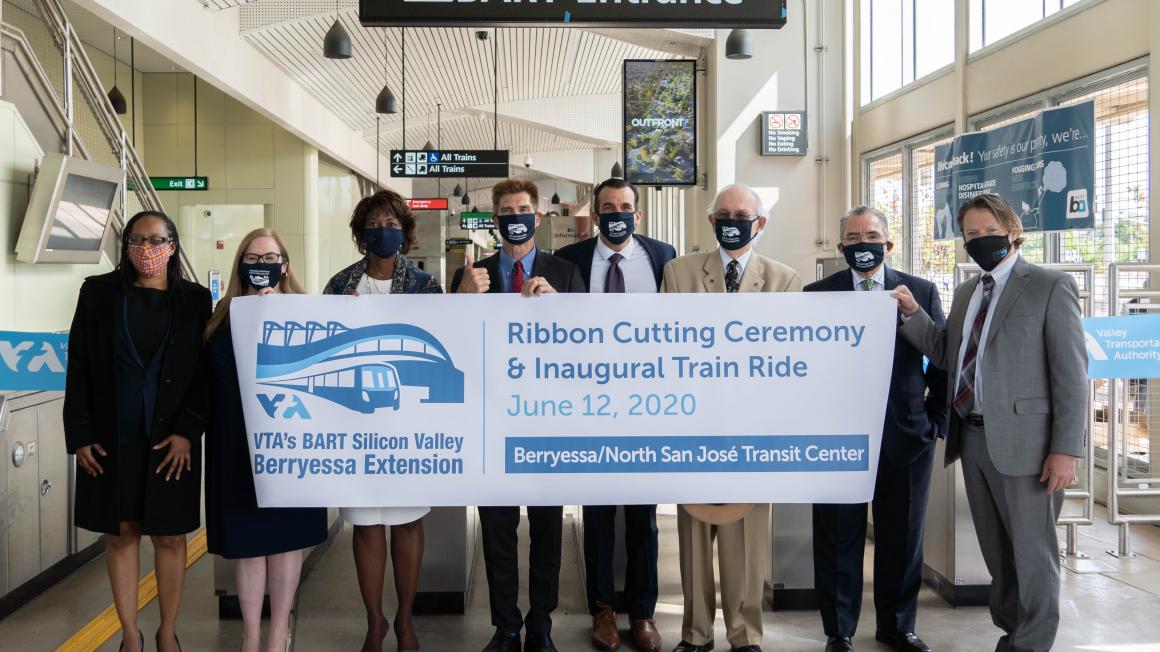 Friday, June 12 marked a celebration of epic proportions although you might not have been able to tell from the size of the crowd. But it was quality not quantity that counted in this case.

Members of the public were invited to live-stream the event to maintain a small crowd and adhere to social distancing requirements. The first train for passengers will depart on Saturday, June 13 at 7:56 a.m. bound for Richmond (BART Orange Line) from the Berryessa/North San José station and will arrive at the Milpitas Station just three minutes later.

After congratulatory remarks and a ribbon cutting, the procession boarded a northbound inaugural train to Milpitas where they were met by the Federal Transit Administration’s Region 9 Administrator Ray Tellis, Congressman Mike Honda, Assembly member Kansen Chu, Santa Clara County Board of Supervisor Dave Cortese, Alameda County Board of Supervisor Scott Haggerty and Milpitas Vice Mayor Bob Nunez, also a VTA Board member. After more remarks and another cut of the ribbon, a southbound inaugural train returned to Berryessa.

In attendance were other past and present elected officials who played a role in helping this project get to the finish line. Two such dignitaries received special recognition for their efforts to bring BART to Santa Clara County over 31 years ago, former San Jose Mayor Ron Gonzales, and former BART Board  member Tom Blalock. Together with the Leadership Group, who has either led or co-led every transportation measure in Santa Clara County dating back to 1984, Gonzales and Blalock fought for critical transportation investment in the Silicon Valley BART Extension. This resulted in the first successful local funding source, 2000 Measure A, approved by voters by an overwhelming 70 percent. There would be two additional local sales tax measures that would come to pass, resulting in the funding to help operate the first 10 miles and construct the next 6 miles of BART into east and downtown San José and the City of Santa Clara.

Today’s celebration highlights the partnership responsible for delivering this long-awaited transit solution. VTA, the mobility manager for Santa Clara County and builder of the 10-mile extension, will own the extension and both new transit centers. BART will operate the service and maintain the system.

BART opened for service in 1972 and, with the opening of these two new stations, will have 50 stations, 131 miles of track and serve five Bay Area Counties (Alameda, Contra Costa, San Francisco, San Mateo, and Santa Clara). BART’s average weekday ridership pre-COVID-19 was 408,000 trips. Ridership projections for the two new BART stations, prior to the COVID-19 health pandemic, were 23,000 boarding on opening day.

VTA broke ground on the $2.3 billion, 10-mile, two-station extension on April 12, 2012. The two BART stations are the newest addition to VTA’s Transit Centers in Milpitas and North San José that opened on December 28, 2019 along with the newly redesigned VTA bus and light rail network to maximize connections to the region's rapid rail systems – BART and Caltrain.

This compact station campus design features a ground-level concourse with below-ground boarding platforms, and a dedicated bicycle storage room with a capacity for 211 bikes. The multimodal, transit-oriented community will connect workers and residents to Silicon Valley’s high-tech employment centers, the Great Mall of the Bay Area, thousands of high-density housing units, and millions of square feet of commercial, retail and office space.

The Berryessa Transit Center is located between Berryessa and Mabury Road adjacent to the expansive Berryessa Flea Market and offers direct connections via VTA’s new Rapid 500 bus to San José State University, Downtown San José and the Diridon Caltrain Station. This station also has a ground-level concourse, but the center boarding platform resides 35 feet above ground. The transit center features new on-street bike lanes leading into a 12-foot wide cycle track and connects to the Upper Penitencia Creek regional trail system that was extended from King Road. Bicyclists will also have access to 219 spaces to leave their bikes rather than take them onboard transit vehicles on the two BART lines or the five VTA bus lines (Route 61, 70, 77, Rapid 500 and Rapid 523).

Both new transit centers feature drop off/pick up loading areas for cars and private shuttles, in addition to plenty of parking – 1,527 spaces at Berryessa and 1,631 at Milpitas – at a cost of $3.00 per day or $50 per month. Find details on how to pay and park here: https://www.vta.org/projects/bart-sv/phase-i/parking.