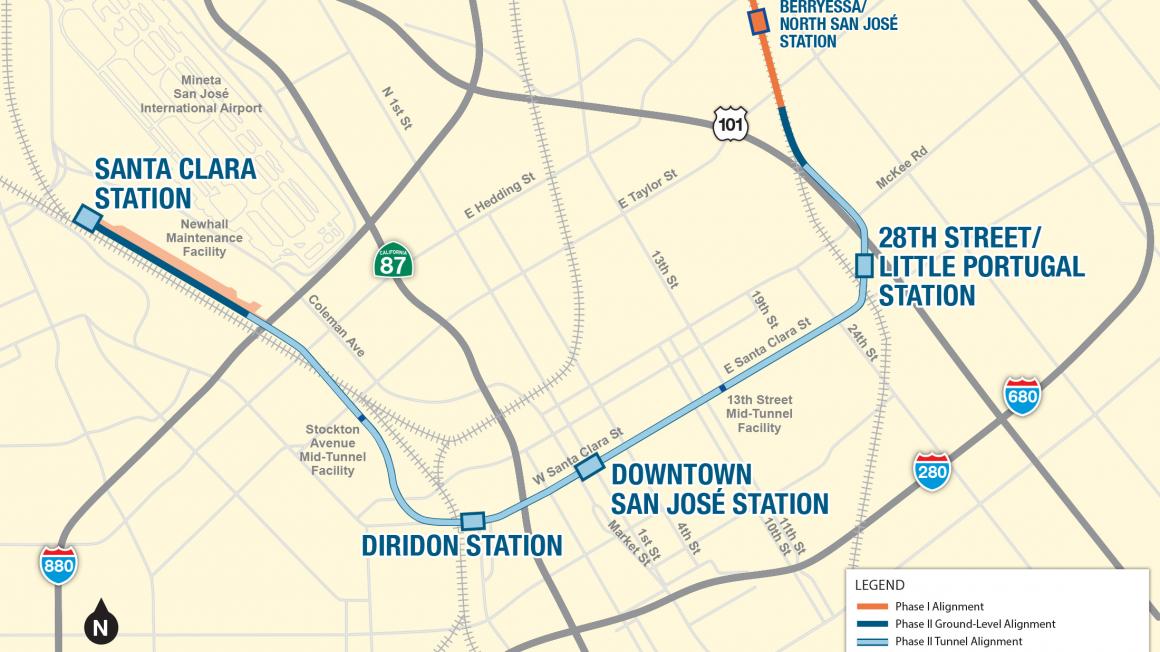 VTA achieved two critical milestones for the BART Phase II Project being the first transit agency in the nation to submit an application for $1.735 billion through the Federal Transit Administration’s (FTA) Expedited Project Delivery Pilot Program (EPD). VTA also received a $100 million funding allocation from the program, announced by the FTA earlier today.

The $1.735 billion federal funds will complete the funding plan to build BART Phase II. The newly established EPD program aims at increasing innovation, improving efficiency and timeliness of project delivery, and encouraging new revenue streams. The $100 million is the second funding allocation received from the FTA program to date, with the first $125 million received in August 2019 for a total of $225 million.

“These two major milestones for the BART Phase II Project affirm the significant merits of the project including enhanced mobility, job creation and access, economic development and recovery and congestion relief,” states Glenn Hendricks, Chair of the VTA Board of Directors.

The FTA’s EPD funding program enables VTA to shorten the funding process by more than 14 months ultimately streamlining project delivery. The program requires that projects utilize public-private partnerships, are planned to be operated and maintained by employees of an existing public transportation provider, and have a federal share not exceeding 25 percent of the project cost.

VTA has secured 75 percent of the project cost through local, state and other non-federal contributions including 2000 Measure A and 2016 Measure B local sales tax measures, state grants, bridge tolls and a negotiated public-private partnership with Google for the Diridon Station. With innovative partnerships and funding from a variety of sources, projects can be completed more quickly, making better use of taxpayer dollars and bringing new transit service sooner to growing communities.

Once the application is accepted as complete, FTA will expedite the review and evaluation of the application materials and notify VTA in writing within the 120-day review process whether the project has been approved for a Full Funding Grant Agreement.

Getting to this Critical Point

In September 2018, FTA announced it was accepting expressions of interest from transit project sponsors for the EPD Pilot Program and that it would evaluate submissions and work with sponsors of selected projects to further define the steps required before a construction grant agreement could be awarded. VTA submitted an Expression of Interest in November 2018. In July 2019,  FTA Acting Administrator K. Jane Williams announced that FTA was beginning discussions with VTA regarding participation in the EPD Program. VTA would be the first agency and the BART Phase II Project the first project considered for the EPD Program.

Over the past several months, VTA has worked closely with the FTA to complete all the prerequisites for the application to qualify for the funding. The EPD application is an online submittal and includes documentation of the requirements included in the FTA July 28, 2020 Expedited Project Delivery Notice of Funding Opportunity. Generally, those requirements include information about the project’s local funding sources, inclusion in local and regional plans, and environmental clearance. It also includes documentation of estimated capital and operating costs, engineering and design documents, ridership projections, project benefit information related to mobility, congestion relief, environmental and economic development; the project’s Public-Private Partnership agreement, and critical third-party agreements.

The six-mile, BART Phase II Extension Project will extend southwest from the newly opened Berryessa/North San José Station with three more stations in San Jose and one in Santa Clara adjacent to the existing Santa Clara Caltrain Station.  Five miles of the alignment will be underground, with a single bore tunnel containing side-by-side and stacked tracks and platforms. Construction is planned to begin in 2022, with substantial construction completed by 2028, followed by system testing and then passenger service.