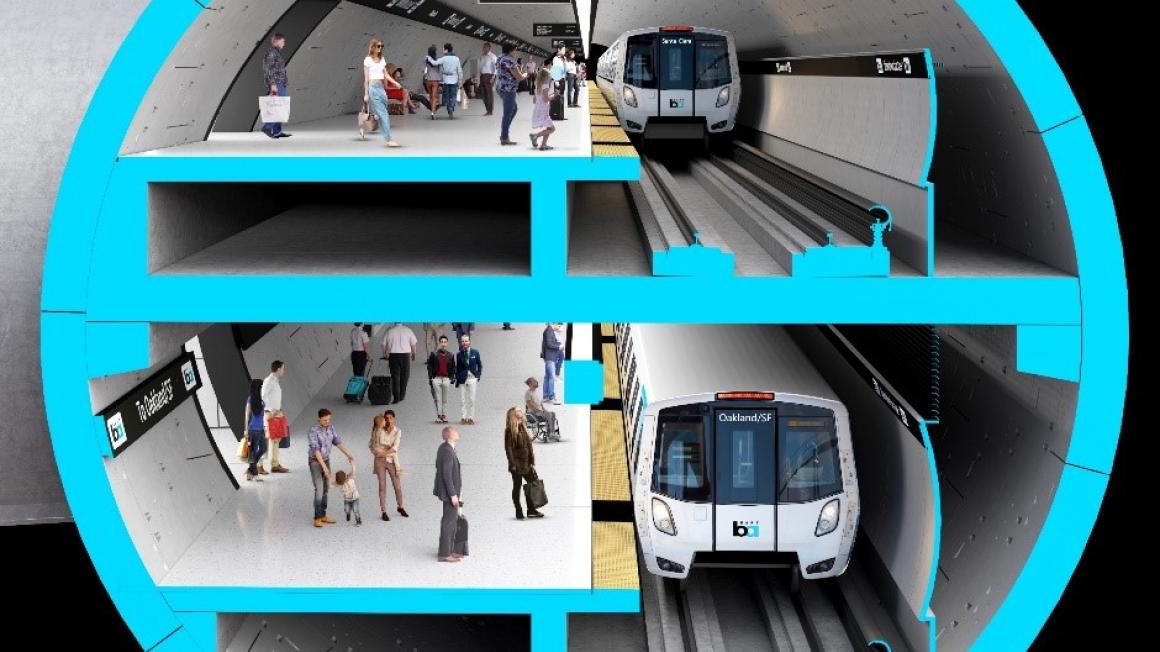 Since 2016, the 5-mile tunnel portion of the 6-mile, 4-station planned BART extension through downtown San Jose to Santa Clara has been the most studied and talked about aspect of the project. After extensive due diligence, public review, industry feedback and discussions with cities and stakeholders on both the twin and single bore tunneling options, the single bore tunnel was selected and approved by both VTA and BART in 2018.

While VTA analyzed both tunneling options during the environmental phase, the single bore tunnel is the only option that was selected and received the required federal environmental clearance through issuance of the Record of Decision (ROD) from the Federal Transit Administration (FTA). With the ROD, VTA officially had the green light to move forward with the 4-station, single-bore project. Over the last 18-months VTA, in partnership with BART, the future operator and maintainer of the system, has worked diligently to advance a single bore tunnel configuration with associated underground stations taking into account operational, safety and passenger experience considerations.

Selection of the single bore configuration represented a recognition that the traditional method of building underground rail, through the use of twin-bores and cut and cover stations, is not always appropriate, especially in dense urban areas. This type of construction involves large excavations to build the underground stations, which disturbs the vast network of existing utilities that lies beneath the street’s surface and causes extensive utility relocations. These construction activities are very disruptive at the street level, and the resulting traffic impacts overall mobility in the community and can leave the local businesses inaccessible or difficult to access as well.

As the project delivery lead and transportation provider for Santa Clara County, VTA sought a solution that built on lessons learned from other major tunneling projects, incorporated feedback from the rail transit industry, and also protected the public from major construction impacts and risks. This includes discovery and impact of unknown utilities that are historically one of the major risks to capital projects leading to higher relocation costs and schedule delays, sometimes for years. Drawing on best practices from around the world and advancements in underground construction, VTA determined that constructing this extension with a single bore tunnel and off-street stations could alleviate many of the construction, traffic, utility, business and economic impacts typically seen with traditional twin bore construction, while still meeting the operational needs and providing a high level of passenger regional rail service.

Much has been said regarding station depth of the single bore but VTA is in good company with many other underground stations in California and nationwide. This includes the soon to be opened SFMTA Union Square/Market Street and Chinatown stations, which have comparable or greater depths. Passengers will be able to traverse to boarding platforms with high-speed elevators.

There is also a misunderstanding that VTA can simply ‘dust off’ twin bore designs that were previously developed and proceed with building this extension. In 2008, before the BART Extension Program was broken into two phases, this twin bore configuration with cut-and-cover stations was relatively advanced. However, those plans are now nearly 15 years old and would require major updates and redesign to meet the current codes and standards in addition to a new environmental clearance process. This would add years to the schedule and further delay revenue service. With only a few months to go before VTA anticipates awarding the first major construction contract for the project, such a change would add significant schedule and cost impacts and negate all the efforts and benefits of participating in the FTA Expedited Project Delivery funding program. Any potential cost savings, if determined, would also be exponentially negated with schedule delays and escalation.

Recently, inaccurate statements have been made and concerns have been raised regarding project costs and its contributing factors. At the onset of the environmental phase, initial cost projections were shared based on early concepts. These cost projections did not include financing charges, contingencies, or costs associated with risks, as these were not estimated at the time. Since then, as the project has continued to progress, time has been spent advancing the design through the preliminary engineering and procurement stages. While this has resulted in additional time added to the project schedule and associated cost increases, it has also allowed VTA to further establish a more comprehensive cost estimate inclusive of required financing costs and risks contingencies. It is important to note that the single bore tunnel configuration has not been identified as contributing to the cost increases associated with the project. FTA’s recent risk assessment also did not provide any indication that any potential additional risks or costs are associated with the selected tunnel configuration.

Currently, VTA is on-track to deliver a project that brings rapid and regional rail service to San José and Santa Clara, avoids major disruption, reduces difficult utility relocations, while still providing a reliable transit option for patrons. With environmental clearance and continued support and commitment from FTA, VTA looks forward to continuing to work together with stakeholders and the public to make this project the best it can be over the next year as it moves into final design and construction.