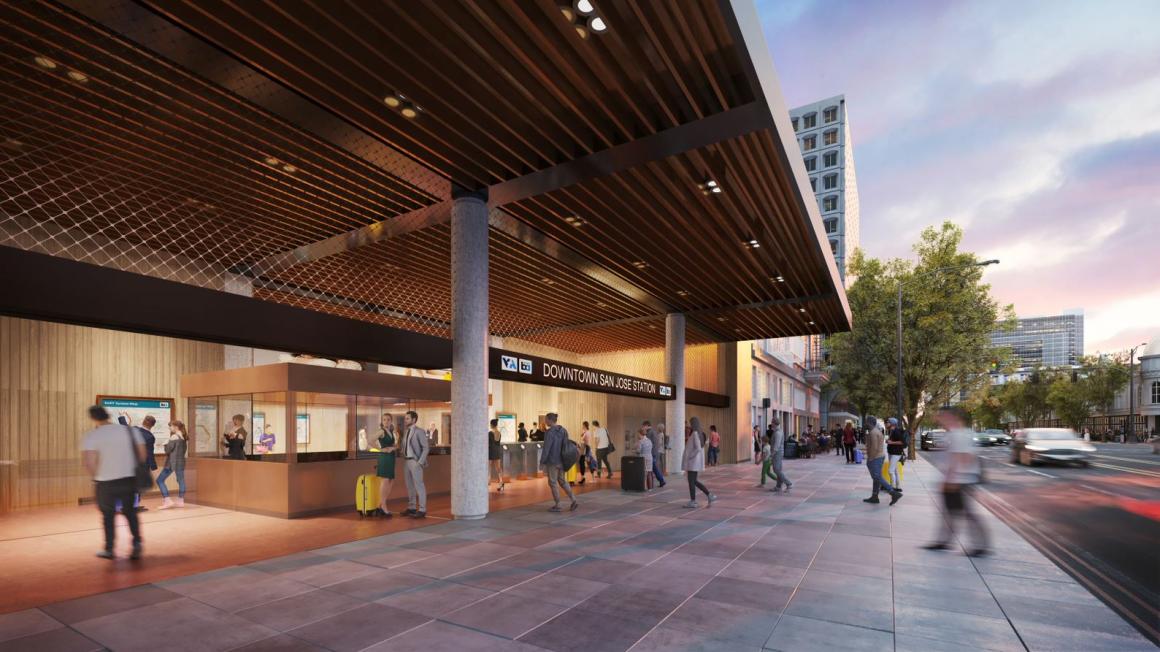 VTA’s BART Silicon Valley (BSV) Phase II Project is a 6-mile project that extends BART service from the Berryessa BART station, which opened for passenger service in June 2020, to downtown San José and the City of Santa Clara. The Phase II Project includes four stations, and the Downtown San José station will be the second station to the south, after the 28th Street/Little Portugal station. Please visit the BSV Phase II Project website for more information about the overall Project.

Over the next few weeks, VTA will feature each of the BSV Phase II Project stations by posting a blog with an accompanying fly-through video for each station. The 28th Street/Little Portugal station was the first station to be featured, and the Downtown San José station is the second BSV Phase II Project station to be featured.

The Downtown San José BART station will be in the largest urban center in the South Bay and Silicon Valley. Downtown San José is a unique place to work, live, and play. It is also an established and growing center of business, culture, and history where local businesses, community-based organizations, and public life thrives. There are over 100 developments advancing in Downtown San José that represent thousands of new housing units and millions of square feet of office potential. The Downtown San José BART station is designed to be a contemporary gateway to a modern multicultural place that is home to major destinations like San José State University, San Pedro Square, San José City Hall, the Convention Center, and the SoFA arts district.

In addition to being designed to complement its cultural contexts, the Downtown San José BART station is designed to complement its physical contexts, as are all of the stations that are part of VTA’s BSV Phase II Project: The stations are designed to bring in daylight and to be integrated with their surroundings, including by locating station entrances and exits in ways that provide direct sightlines and direct access to and from nearby places and transportation services.

The Downtown San José station is expected to accommodate around 30,000 daily riders in 2040 who will be able to walk and roll between the station and many nearby homes, businesses, educational institutions, cultural centers, and transit services. There are many VTA bus and light rail routes that serve Downtown San José, including the Blue and Green light rail lines on 1st and 2nd streets that are a short walking distance from where the Downtown San José BART station will be. Santa Clara Street is also an important transit corridor where many high-quality and frequent bus routes operate and provide riders with the ability to connect to other parts of the City and County. These bus services can be accessed from directly in front of the Downtown San José BART station.

VTA’s BSV Phase II Project will also provide improvements for people who walk, roll, and take transit to and from the stations. For the Downtown San José station, these facilities include protected bike lanes, wider sidewalks, intersection improvements, streetscaping and wayfinding amenities, 270 secured and unsecured bike parking spaces, and a paseo that provides additional connectivity through the primary station block between Market Street and 1st streets. In this context, a paseo means a walkway through a developed block (not a sidewalk). The stations have also been designed to achieve an Envision Platinum rating and meet VTA’s sustainability goals.

The BSV Phase II Project team developed the current station concepts and accompanying access improvements to be consistent with applicable standards and requirements and to inform contractor proposals. Many of the concepts were developed in partnership with the City of San José and the community, including the station aesthetic and access and circulation concepts. Like all of the BSV Phase II stations, the community has been engaged to discuss development of the Downtown San José BART station for years, including via quarterly Community Working Groups (CWGs), other public meetings, and the station aesthetics effort that was conducted in 2021.

More community engagement will be conducted to further refine the station designs and their multimodal access improvements after the contractors are on board.

VTA also owns most of the block in which the station’s primary entrance building will be located, and VTA developed a Design Development Framework (DDF) to guide transit-oriented development (TOD) decision-making for the block. TOD in immediate station vicinities, and transit oriented communities (TOCs) that extend further into station areas, increase transit ridership and increase VTA’s revenues that can then be spent to benefit the public. The DDF for this Downtown San José BART station block clearly articulates a world-class transit-oriented vision that capitalizes on the transformational opportunities created by VTA’s BART Silicon Valley Phase II Extension.

Please visit the BSVII Project webpage for more information about the overall project, including information about the Project’s benefits, how the stations have been designed, timelines for project delivery, and how the community has been and will be engaged to plan, design, and deliver this transformational project that will ring the bay with fast and frequent passenger rail service.